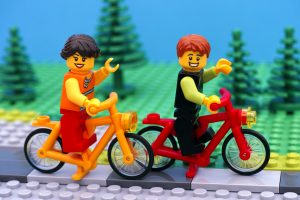 Worst feeling in the world? Stepping on a LEGO® brick. And as an adult and possibly parent, we’re constantly reminding our kids to pick up those tiny, hard pieces of plastic that hurt out feet and wreak havoc on the vacuum.

For Ray Rogers and Mike Wassel, their adult experience with LEGO bricks is very different. They are coaches of Bricks in Pajamas, a FIRST Robotic LEGO League Team based in Lawrence Park, PA. As coaches, their mission is to inspire their group of 6th and 7th graders to be innovators and succeed in the FIRST LEGO challenge that is based on a real-world topic. The challenge consists of two parts: a robot game where a working LEGO robot must navigate, capture, transport, or deliver objects; and the innovation project where the team must identify a problem with a public space in the community, design, and share a solution. This year’s challenge: Our cities and towns face big issues, like transportation, accessibility and even natural disasters. How can we shape a better future for everyone? 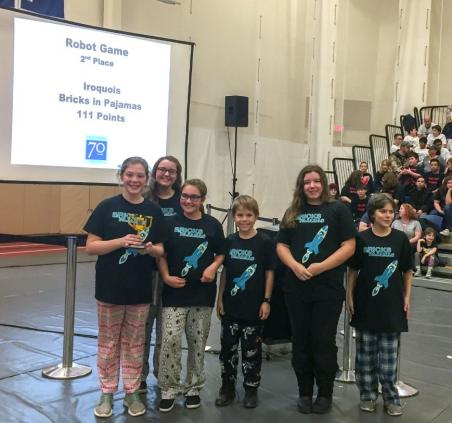 Great Lakes is one of Bricks in Pajamas’ sponsors this year, so we wanted to join a team meeting—after all, GLCC has robots so we wanted to be involved, too! GLCC was introduced to Jenna, Lauren, Brady, Alexis, Paige, and Maya. Their interests range from drawing, reading, stretching their time across multiple sports, and Scouts of America. Personalities range from high-energy and bubbly to calm and methodical. For some team members, this is their 4th season on a LEGO team. Despite the differences, each member has a specific role on the team (researcher, coder, “working the board”) and they come together to in a great way—last year the team won second place at the LEGO League competition held at Penn State Behrend. This year, they are going for first.

During our meeting together, the team was introduced to the FIRST LEGO challenge and they spent 20 minutes spit balling possible topics to the group. Two topics that stuck out: stray cats hurting the bird population and the need for more homeless shelters. Before I had the opportunity to question the cat problem occurring in northwest PA, the team continued to flush out the homeless shelter scenario. In their homeless shelter, there should be job training at no charge. So if there isn’t a charge to live and learn at the shelter, the teachers must be volunteers or work for low wages. Could college students have an internship at the shelter serve as the teachers? Could an already empty building in downtown Erie be the shelter? But wait! What types of job skills should be taught: Professional? Engineer classes? What about vo-tech skills because the US needs more of those workers?  People need to be taught to create a resume, how to survive an interview, but before that, they need to know correct grammar. Can the shelter have a daycare center, too?

The excitement over the homeless shelter scenario was wide-spread across the team. It certainly was personal to some of the team members as they talked about how people in their life struggled after losing a job. The initiative to teach vo-tech skills was intriguing to us—Great Lakes Manufacturing can only be successful with welders, line operators, etc. The meeting ended with nearly finishing up the six large pizzas that were delivered (middle schoolers eat a lot) and members were sent home to brainstorm additional ideas that could satisfy the LEGO challenge. GLCC will have to check back with the team to know what topic was chosen, but regardless of the topic, it is apparent that the team will be able to take any topic and run with it. After all, you have to run to make it to first place, right?!

Cart has been replaced

Login first to save cart
Back